About Amy Reiley - Life of Reiley
Skip to content 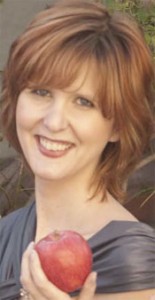 Amy Reiley has combined culinary education with a life long ardor for all things food. In August 2004, Amy became the second American to earn a Master of Arts in Gastronomy awarded by Le Cordon Bleu. While working toward her Master’s, Amy rose to prominence for her work in culinary aphrodisiacs. In 2006, Amy released her first book, Fork Me, Spoon Me: the sensual cookbook, cementing her role as America’s leading aphrodisiac food authority. The book filled a niche in the cookbook market so successfully that the title went into a second printing in less than two years.

Through her company, Life of Reiley, Amy has found many avenues to promote her aphrodisiac knowledge and unique take on life’s “consuming passions.” The Eat Something Sexy website and Amy’s monthly e-newsletter, Amy Reiley’s Aphrodisiac of the Month are considered the online authorities on aphrodisiac food history and science. She speaks and consults on the topic and has appeared on The Today Show, CBS Early Show, Nightline and even Playboy TV, (you will recognize her as the one wearing clothing).

But Amy’s culinary knowledge is not limited to aphrodisiac foods. In the year 2005, Amy was singled out as one of the five best female wine professionals in the world by France’s Wine Women awards.

As the creator of Amy Reiley’s Pocket Vineyard in 1999, Amy quickly established her place in this male dominated industry by introducing the world to the first comprehensive wine app for PDA’s. In 2001 she launched the companion program, Amy Reiley’s Pocket Gourmet, lauded by Newsweek as the first of its kind. Both the Pocket Vineyard and Pocket Gourmet were named two of Worth Magazine’s “must have” apps in 2002.

Amy’s second book, Chile Aphrodisia by Rio Nuevo press, was released in June 2006. Her other books include Romancing the Stove: the unabridged guide to aphrodisiac foods and The Love Diet. In addition to writing, Amy speaks and consults on various food and wine topics. She also runs Life of Reiley’s boutique publishing company. Her publishing successes include bestselling baking book Kiss My Bundt: recipes from the award-winning bakery. Amy’s latest book, Eat Cake Naked: aphrodisiac desserts to heat up your love life, co-authored by nutrition expert Delahna Flagg, became an Amazon bestseller in its first week.